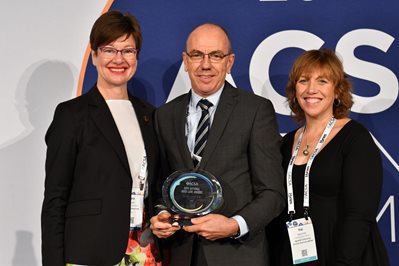 Warrigal was awarded the ‘Aged Care Provider of the Year’ National Award at the Aged and Community Services Australia (ACSA) National Summit at Darling Harbour this week after winning the NSW/ACT award last month.

Warrigal CEO, Mark Sewell, said the news was still sinking in that Warrigal had won the national award.

“It is such a great honour to receive such an accolade, especially as we were up against some very impressive not-for-profit organisations from across Australia.

“To have an Illawarra-based company win this award makes it even more special – we’ve been operating here for over 50 years and to have our regional services across the Illawarra and Southern Highlands recognised at a national level really is a great achievement”, he said.

Mark said Warrigal was using the award to promote the great work being done in the aged care sector by our 900 staff and 350 volunteers who have worked together to achieve this recognition.

“This award is really one to be celebrated by our staff, volunteers and our customers and residents – who all want to achieve the same goal – older people in our region having great lives. That’s something which deserves to be celebrated”, Mark said.